Augmented reality opportunities in marketing in 2017

Predicted to become the next major media platform, augmented reality is heralded to be as revolutionary as the laptop and mobile phone once were. The basic premise of AR technology takes computer-generated information and contextually applies it to a view of the real world, in real time. Sounds like a technology made for through-the-line marketers? Indeed, it is. Brands have started to take advantage of this additional informational layering technology to improve their digital content experiences and help customers in their purchase decision making.

Augmented reality applications have come on in leaps and bounds over the course of 2016, raised to mainstream appeal by catalysts such as Pokémon Go and the Snapchat lens funtion. Snapchat specifically has helped users understand what the technology is which makes it easier for brands to follow on with branded AR experiences. No longer gimmicky, in 2016 we have seen AR take centre stage for the first time.

While early applications of augmented reality have come from the gaming, healthcare and travel sectors, the launch of Microsoft HoloLens and Meta highlight the potential of augmented reality going forward. As AR is becoming part of digital natives’ visual vernacular and users get accustomed to pictures of reality that have been augmented, a wide range of applications in many different areas can be expected.

We’ve picked out a few industry sectors to showcase AR applications and opportunities for brands and marketers. 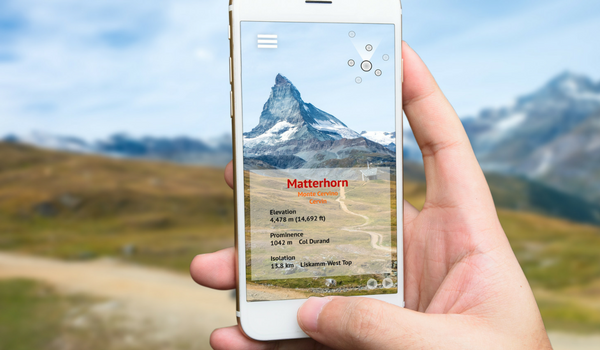 We’ve seen a variety of AR applications in the publishing and broadcasting sectors over the last year or so. Most recently, The New York Times’ branded content arm, T Brand Studio, created a project with IBM called “Outthink Hidden” which is inspired by the film “Hidden Figures”. The app T Brand Studio AR is free on iTunes and Google Play and transforms your smartphone into a virtual museum about unsung heroes in the STEM fields. It uses 3D images, video, audio and text which are activated by sensors. Unfortunately, all of the app’s 150 markers are placed in cities around the US, so those of us in the rest of the world will not be able to experience it.

TV networks are also starting to work AR technology into their programming in order to create richer and more immersive experiences. The Weather Company is one such broadcaster using augmented reality to enhance its programming. Augmented reality representations of locations in the US bring weather reports to life by showing the meteorologist on-location as part of a virtual set with AR objects. Brands are invited to get involved via product placements and sponsorship opportunities. According to research carried out by the channel, 54% of viewers say they would tune in longer if they knew there would be a 5-minute virtual reality segment.

Another broadcaster, BBC Worldwide, has recently partnered with visual discovery platform Blippar to let people experience content from the Planet Earth II series using augmented reality. The app lets people scan certain images within the show in order to get further information and find additional clips from the show. For those of you in Hong Kong, Indonesia, Malaysia, Singapore, Taiwan and Thailand, the Planet Earth II Blippar experience is available to try.

eMarketer reports that media companies specifically continue to invest in VR/AR companies to create and distribute entertaining, immersive content. For marketers, partnering with a media company provides an opportunity to experiment with AR in a publishing or broadcasting environment.

For a detailed evaluation of the role of virtual and augmented reality in news, take a read through the Knight Foundation’s “Viewing the Future? Virtual Reality in Journalism” report.

We have seen some rather practical and useful AR applications in the cosmetics space, providing meaningful decision-making support in the path to purchase. Retailers have, for example, used augmented reality to overlay colours and shapes on users’ faces, including lipstick, eyeshadow and eyeliners – providing a new way to support the buying experience.

Have a go at this on Sephora’s mobile app by trying their Virtual Artist tool powered by ModiFace and test products by way of AR technology. Similarly, L’Oreal’s MakeupGenius app allows consumers to test the brand’s products, while the YouCam Makeup app lets you virtually try on and order makeup products by Elizabeth Arden and others.

Aforementioned AR tech provider ModiFace also recently launched a live scan version of face analysis technology, reversing the AR process by taking a frame-by-frame scan of a photo (or video still) to determine products worn by celebrities or friends, allowing users to recreate the look for themselves.

According to a Demandware study, 72% of U.S. beauty brands are testing a form of “guided selling” to push sales and this includes augmented reality. 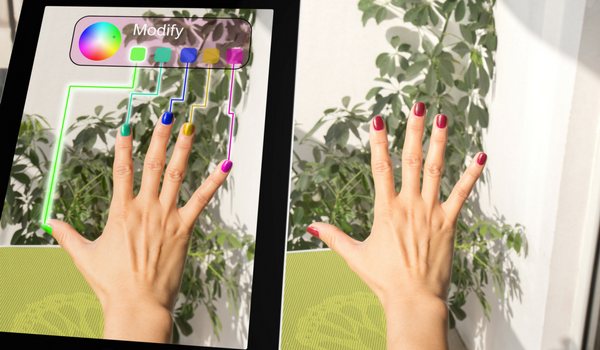 Early AR adoptions in the world of retail included Asda’s Horrible Halloween Hunt campaign where children were guided on an in-store adventure by character ‘Sir Spook’ using the Asda app. However, AR technology in retail and fashion is again predominantly used to make virtual products more palpable for digital consumers.

We have seen Google partnering with Gap Inc. to let shoppers try on clothes “virtually“ at home via augmented reality. The DressingRoom lets shoppers choose a Gap item to try on, select their size and a 3D virtual mannequin pops up modeling that item. While shoppers can’t see the clothes on themselves, the user can choose from different body types and the virtual mannequin models and approximates the user’s size.

Some other useful AR tools are also emerging in the homeware and interior design world, where augmented reality technology is used for simulating how furniture would look in customers’ homes and for customising kitchens. 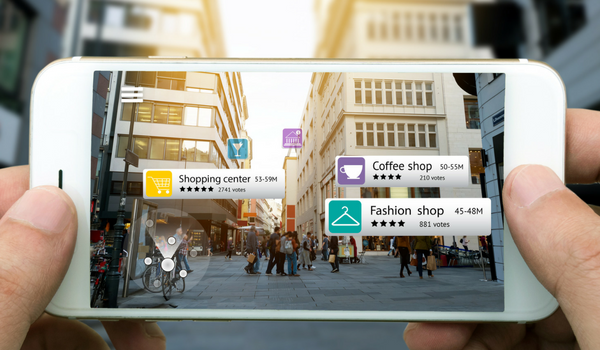 Forecasting the size and growth rate of the AR market is still difficult. However, in 2016, $1.8 billion has been invested in VR and AR companies across 171 deals – an increase of 140% versus 2015.

Research carried out in the US surveying product developers in the virtual reality space suggests that the majority of those questioned were more optimistic about the future of AR than VR. However, this appears to be largely due to current VR development limitations including lack of budget and lack of resources.

Thanks to increasingly capable and affordable devices, as well as mature operating systems and mobile platforms, AR applications have become a lot more accessible. The need for more brands to develop AR experiences is clear as today’s consumers increasingly crave immersive, personalised content and shopping experiences.

For brands, there are plenty of creative opportunities out there, with AR providing an outlet for superior content and digital sales experiences in pretty much any industry and area of life. However, most brands have to build and rely on their own user bases for branded AR experiences on their own apps and platforms as not one ‘killer platform’ has yet emerged. For brands to succeed at scale, AR needs to take another quantum leap.

Who will be at the heart of the AR breakthrough? Will it be facilitated by an existing AR app such as Zappar or Blippar, one of the big social platforms introducing the functionality or a new big player emerging on the market? It remains to be seen.

Our words of advice? Don’t let current limitations stop you from experimenting – augmented reality will be second nature to us in the not too distant future!