5 Digital Marketing Lessons from the US Presidential Race

Whatever your opinion of the often outrageous and always unpredictable 2016 United States presidential race, one thing is certain: political campaigning looks significantly different than it did since even the last election, just four years ago. And digital media is shaping that change.

Traditionally, votes were won through television ads and newspaper coverage in homes across America. Now, with the reach of traditional media ever-diminishing, candidates have to look to newer, digital mediums to communicate their message.

The average citizen today has access to a wealth of digital devices and platforms, making the voter journey more complex than ever before. To be effective, a presidential campaign must reach out to the electorate with the right message, at the right time and through the right channel – with content optimised for that medium. This is a challenge, as any digital marketer knows. But it also opens up a wealth of opportunities for candidates to engage with the public in meaningful, creative and cost-effective ways.

Some candidates have succeeded in this new way of campaigning, while others haven’t fared quite so well. We explore candidates’ digital marketing strategies to see what we can learn from them… and what we should avoid.

1. Be Ready For Real-Time Conversations With The Right Content

Presidential campaigns are meticulously planned out several months – even years – ahead of election day. Yet, like many marketing efforts, some of the brightest ideas occur on-the-fly. A great campaign should therefore be flexible enough to deliver timely marketing messages in response to events of the moment.

Hillary Rodham Clinton’s campaign did just this when it responded to Republican rival Donald Trump’s dubious accusation that Clinton has nothing going for her but the “woman card”. With enviable agility, the Clinton team quickly created its own limited edition “official woman card”, to be sent out to supporters who donate to the campaign.

The hot pink card which reads “Congratulations! You’re in the majority” helped to drive the biggest fundraising boost that the campaign has seen yet, enabling them to raise more than fellow Democratic candidate Bernie Sanders for the first time in several months. Within the space of a few days, the “woman card” and related merchandise (a deck of playing cards with statistics about gender inequality and “Deal me in” T-shirts) and complementary fund-raising emails and text messages brought in 127,000 donations from 118,000 donors – 40% of whom had never given to the campaign before.

The campaign’s witty and well-timed response not only helped to raise money, it also earned highly prized organic media coverage from numerous high-profile publishers and online influencers, helping to boost public interest in Clinton and her policies on gender equality. In the month of April alone, there were more than 30,000 searches for terms closely relating to the ‘woman card’, while the stunt sparked a lively conversation on social media, with the hashtag #WomanCard becoming a top trending topic on Twitter.

2. Ensure You Have A Solid Technical Foundation

In the most memorable moment of a lacklustre campaign, Republican presidential hopeful Jeb Bush was left red-faced when it was discovered that visitors to JebBush.com were being redirected to rival Donald Trump’s campaign site, DonaldJTrump.com. It was widely reported that the Trump campaign capitalised on Bush’s failure to renew his domain name.

While it transpired that Jeb Bush had never actually owned the domain (his official campaign site sitting on Jeb2016.com), let this be a cautionary tale about the importance of a solid technical infrastructure. Technical considerations don’t have the appeal of ‘sexier’ digital specialisms like content strategy and social media marketing, but they are absolutely essential. A fast, responsive and – most importantly – live website that is optimised for users and search engines should be the cornerstone of any digital campaign. 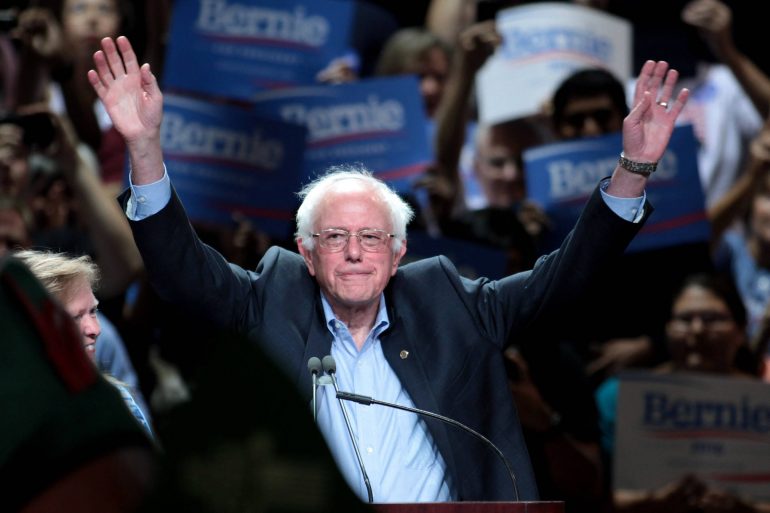 3. Tap Into Your Brand Advocates To Stretch Marketing Budgets

Digital media has allowed non-traditional candidates using non-traditional methods to stay in the presidential race for longer, and with tighter budgets. Nowhere is this more evident than in the case of Bernie Sanders.

Marketers everywhere can learn a thing or two from Sanders about harnessing the power of brand advocates; the populist Vermont senator’s campaign is truly powered by the people. The dedicated supporters that pack stadiums to see Sanders speak are doing everything from raising campaign funds to canvassing and even coding to help get him to the White House.

Crowdsourcing is at the heart of the Sanders campaign. One area where this is evident – and much-publicised – is fundraising. To date, Sanders has raised $210 million from more than 2.4 million donors – with an average contribution of less than $26 per person. Open Secrets data shows that, to date, 99.98% of the campaign finance raised by Sanders has come from individual contributions rather than PACs, Super PACs and other groups, compared with 96% for Donald Trump and just 70% for Hillary Clinton.

Crowdsourcing doesn’t stop at fundraising though. User-generated content plays a crucial role in Sanders’ campaign. “Coders for Sanders” is a collective of web developers, designers and creatives who formed to create digital assets for the campaign, including the website FeelTheBern.org, which lays out Sanders’ policies on key issues on one “search-friendly, sharing-optimized” platform, and the app “Field the Bern”, a mobile canvassing tool. The group originated on social news site Reddit, independent of the official Sanders campaign.

Sanders’ grassroots appeal has even inspired supporters to create an unofficial campaign ad, “Together”. The emotive video, which has been met with critical acclaim, has its own website and social media pages, where visitors can access more volunteer-created shareable content, including create-your-own downloadable posters.

Whether or not Sanders wins the Democratic nomination, his campaign demonstrates just how far authenticity, collaboration and creativity can take your brand.

4. Engage Your Audience At Every Touchpoint With Valuable Content

With an electorate that is permanently connected through multiple digital channels, presidential candidates are now faced with a dizzying array of methods to reach out to voters. This presents both opportunities and challenges; get the tone, message and platform of your content right and you could win loyal supporters, get it wrong and you face turning off potential voters for good.

Engaging with audiences through social media is particularly important amongst the youngest generation of voters. While Facebook played an important role in the digital strategies of previous elections, this year we’ve been seeing candidates reaching beyond the well-established social giant to newer, more niche platforms in order to pitch to Millennial voters – with varied success.

Donald Trump is well-known for harnessing the power of Twitter to motivate, entertain and outrage a vast audience, while his Democratic rivals have been turning their hands to Snapchat to provide “behind-the-scenes” insight into their campaigns. Bernie Sanders in particular has made real progress with campaigning on the platform since joining in November 2015, announcing his announcing his arrival with the self-deprecating Tweet: “What is this Snapshot thing and why do I only get ten seconds?”.

A snap of Sanders playing basketball with his grandchildren after winning the New Hampshire primary received significant coverage on social and mainstream media, and the campaign even sponsored a Snapchat geofilter encouraging young voters to “Feel the Bern” at the Iowa caucuses.

Some candidates have struggled to set the right tone on newer media channels. Social media is often seen as fun and frivolous, but it’s important to remember that it’s also a platform for having serious, meaningful conversations with a wide range of people. Hillary Clinton’s social team failed to do this in August last year, when they asked followers on Instagram to describe how their student debt makes them feel “in 3 emojis or less”. Unsurprisingly, the response was resoundingly negative; the post was met with mockery and anger from a sophisticated and – let’s not forget – highly educated audience who felt that Clinton was patronising them and belittling an important issue.

This isn’t the only ill thought-out use of emojis in the Clinton campaign’s digital strategy. Just one month after the much-maligned post, a “HillMoji” emoji keyboard was released for all major messaging apps, including WhatsApp, iMessage and Facebook Messenger. While the “Kimoji” app was a great success for Kim Kardashian, famously making $1 million a minute on its launch day, it’s doubtful that voters would want or expect a presidential candidate to emulate the reality star.

Thankfully, Clinton has since got better at engaging with younger audiences on social media in an authentic and respectful way. Her Instagram feed is now more carefully curated and feels personal and intimate, and the campaign has made good use of influencer marketing through Instagram takeovers from notable supporters like Katy Perry and Girls’ star and creator Lena Dunham.

Of course, we can’t talk about the US presidential elections without exploring upon the phenomenon of Donald J. Trump.
For all of Trump’s shock tactics, one of the most genuinely surprising things about his campaign is the budget. Despite a self-declared net worth of $10 billion, Trump has managed to make it to the stage of presumptive Republican presidential nominee with one of the lowest ad budgets. Sources suggest that Hillary Clinton and Bernie Sanders have both spent almost three times as much as the Trump campaign on paid media, while fellow Republican hopefuls Marco Rubio and Jeb Bush spent more than five and eight times the amount, respectively.

And yet it’s almost impossible to turn on a TV, visit Facebook or Twitter or browse a news website without seeing Trump. While in some ways this is normal – there’s no denying that the US presidential elections are newsworthy – Trump’s organic media coverage dwarfs all other candidates. A New York Times study estimates that Trump has earned the equivalent of a massive $2 billion in free media. The Trump campaign’s ability to earn media is in fact record-breaking – the value of his free media coverage is double the total cost of the most expensive presidential campaigns in history.

While it’s impossible to deny that Trump’s marketing efforts have put him at the forefront of water cooler conversations around the world, it remains to be seen whether this is enough to win him the election. After all, the vast majority of media coverage Trump has generated is negative (although not the most negative out of all the candidates – that accolade goes to Clinton) and evidence shows that a significant proportion of voters in the US have little trust in mainstream media anyway.

It is, however, clear that the buzz Trump has achieved through earned media has allowed the campaign to achieve far greater results from a much smaller budget than his rivals.