Emojis: The New Language Of The Internet

It wasn’t long ago that many people were claiming the English language was dead. Abbreviated terms such as ‘LOL’ and ‘FOMO’ became widespread, and the nay-sayers believed that laziness would eventually lead to the English dialect being phased out and replaced by ‘text speak’.

But TBH, the English language has always evolved, and will continue to evolve. Look at how we, as humans, began to communicate: cave drawings. Yes, we created our own Latin language spin off, and many other countries around the world built their own languages, but we’re now in the Internet communication age.

How we communicate has fundamentally changed, with most young people now texting and messaging far more than emailing and writing letters. Technology has evolved, and how we communicate is evolving with it.

Emojis are the next level of modern communication, and could be the starting point of we, as humans, coming full circle and once again communicating through pictures. Albeit aubergines, poos with faces and crying laughing emojis are a far cry from historical cave drawings.

Emojis were invented in Japan (where else?), and didn’t make an appearance in the Western world until the iOS 5 update, where Apple introduced the standard emoji keyboard. Emojis were standardised by the Unicode consortium in 2011 as part of Unicode 6.0, and along with the recent iOS 7.0 update, there are now over 970 different emojis available, as well as options such as a skin-tone modifier.

In 2016, Unicode 9.0 will see an additional 38 emoji added. Words on a page will never be replaced by emojis thought, right? Right. But it’s important to remember how today’s generations communicate. They mostly using private messaging applications, such as Messenger and WhatsApp, as well as social media platforms such as Snapchat and Instagram.

When used on mobile, emojis are just a tap away. In fact Instagram announced in May this year, that almost half of all text on its service contains at least one emoji. Emojis are taking the Internet by storm. The image below, taken from Instagram, shows how usage has accelerated. 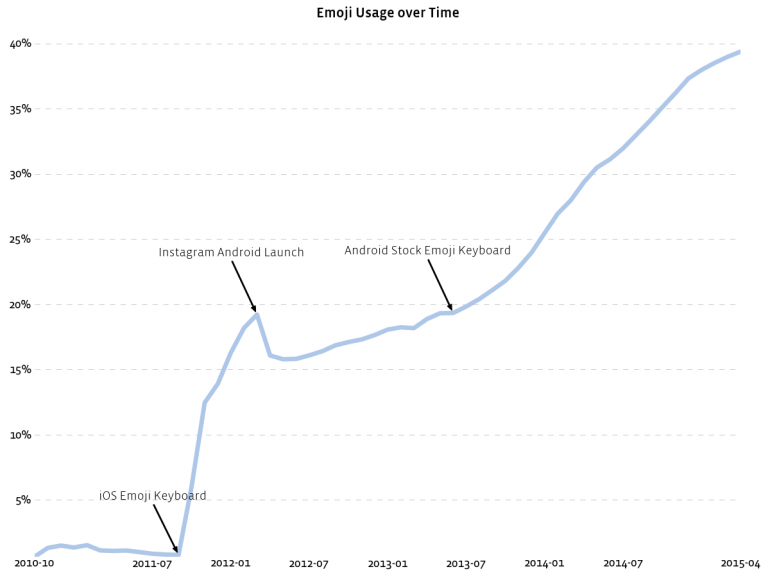 So much so in fact, that Internet slang usage has decreased as emoji usage has increased. 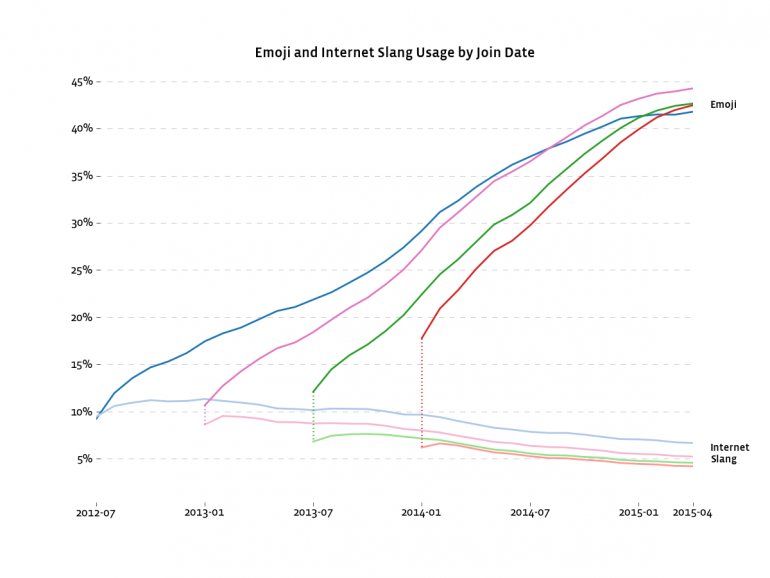 Instagram also added support in May for emoji characters in hashtags, which allows people to tag and search content with their favourite emoji #. In Snapchat’s latest update, there is now a separate tab for adding emojis on top of your photos, instead of them taking up text space. 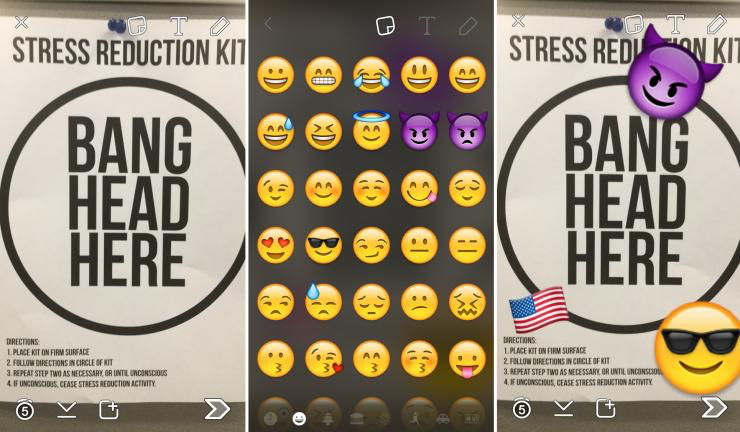 What about Twitter? Well, put simply, there are millions of emojis used on Twitter everyday. Just check out the awesome Emojitracker.com to see emoji use in real-time on Twitter (warning, flashing lights).

Even Andy Murray jumped on the emoji bandwagon earlier this year, tweeting in fun-filled micro-picture detail how his wedding day would pan out. The description is open to interpretation 🙂

In November 2014, Twitter announced they were open sourcing Twitter emojis for everyone. Most recently, Twitter added Premier League team emoji pictures, so whenever you tweet using a hashtag such as #MUFC or #LFC, a little team crest emoji will pop up next to the hashtag.

Since Apple first released the emoji keyword, it has transformed how we communicate using mobile devices. But what about desktop computers, and how are emojis going to affect digital marketing?

From a digital marketing perspective, SEO and PPC won’t really be affected, but don’t be surprised to see Google supporting emojis in the near future, and the icons appearing in meta descriptions and ad text soon after. Social media and communication campaigns are where the real impact is beginning to be seen.

In May 2015, the WWF launched their #EndangeredEmoji campaign, where they chose 17 emoji animals that are endangered and for every animal emoji used in a tweet, you would donate 10p.

McDonald’s, IKEA, Norwegian Air and Dominos also followed suit, with the latter running a campaign that stated once customers have registered an ‘Easy Order’ account with Domino’s, simply tweeting a pizza emoji would result in a delivery.

Possibly the most important – and unique – aspect and benefit of emojis for communication and digital marketing are they span international language barriers. It doesn’t matter what your emoji is: everyone, regardless of language, can interpret its meaning.

As mentioned above, emoji are the next evolution of communicating. Even sometimes complex thoughts or emotions can be distilled down into simple pictures. In many previous posts, we’ve banged the drum about social media and content marketing becoming human. There needs to be an emotional reaction from the content, and images are videos help to achieve that.

Emojis help a brand to become more human, whilst using pictures at the same time. It will be a case of test and learn, but finding the right approach for you brand is crucial, as emojis aren’t going away anytime soon.