If you’ve been keeping in touch with recent current affairs it’s likely you’ve come across the phrase ‘Fake News’. Whereas it is clear that fake news has the potential to impact reputations and livelihoods, what hasn’t been confirmed is whether it has the potential to penalise or harm your SEO efforts. Could Google slam your site if it is found to contain fake news, or even be linked to/from fake news?

What is fake news?

Fake news is, quite simply, false or inaccurate information relating to a theme or topic that could be deemed contentious. Fake news exploded onto the public arena towards the end of the 2016 US presidential race and has been in the spotlight ever since. Looking at the below trend graph for the term “fake news” shows the extent of this explosion in November of 2016: 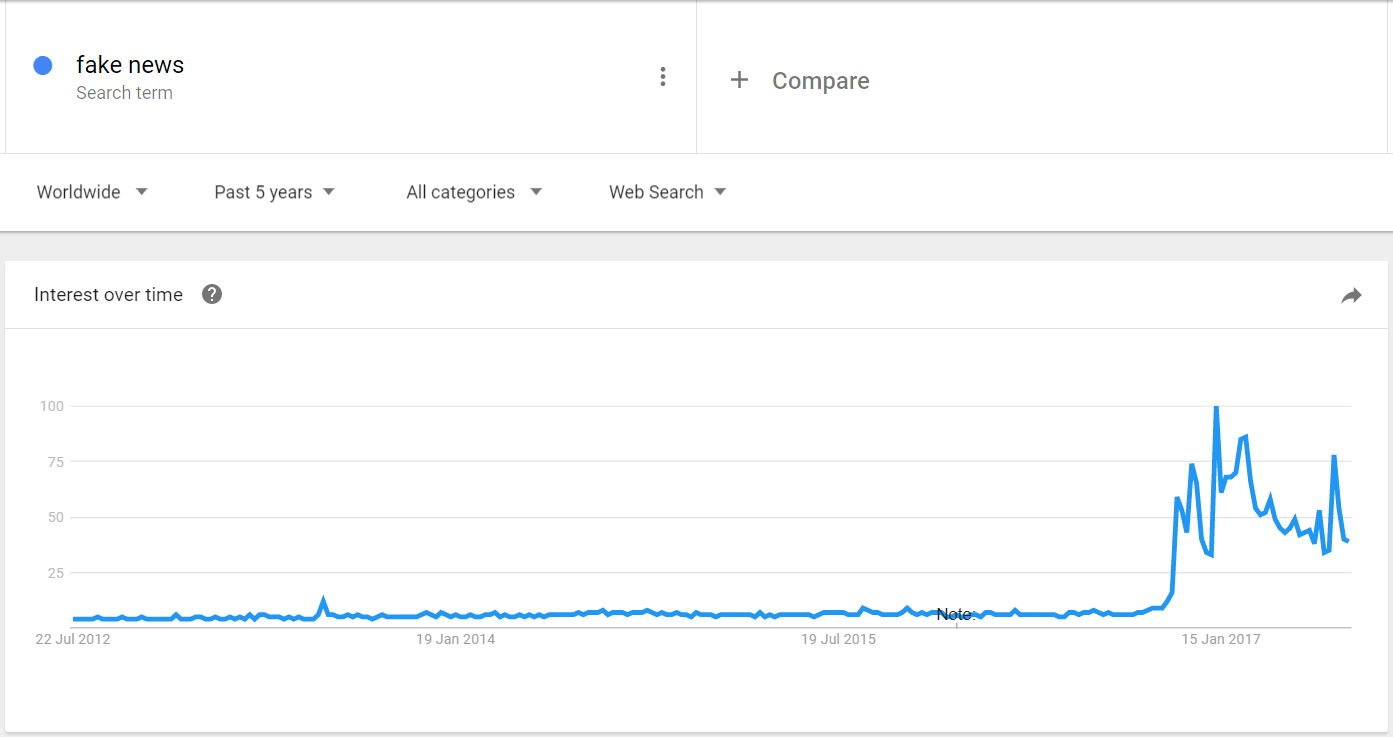 Although originally limited to political quotes and claims, it has now spread to include geopolitical, history, sports, medical and environmental assertions.

What steps are being taken to clamp down on fake news online?

Google has publicly said it condemns fake news and has vowed to continue ensuring its search results are accurate and concise. Online tools such as Politifact and Snopes aim to clean up contentious online claims with its fact checking service. Although not officially endorsed by Google, they allow users to make “a more informed judgement” according to Google.

This has been integrated using ‘ClaimReview’ schema markup that can display whether a claim is true or false in search results:

Only online publishers that are deemed algorithmically to be an authoritative source of information can qualify for inclusion. It also does necessarily mean that if a statement is deemed untrue that Google will automatically remove the listing.

Social networks, due to their ability to spread news fast, have also come down hard on fake news. Facebook, the largest online publisher of user-generated online content, has vowed to remove fake profiles, fact check stories and provide warning labels below articles it deems contentious.

This is the all-important question. Many webmasters have been left guessing at what may happen to their website if they are found to contain fake (or accidentally contentious) news.

For those not involved in the spread of fake news but simply hyperlinked to by an offending fake news story, or linking off to a fake news story themselves – could they too face being penalised?

Unfortunately, the answer seems to be a tricky one. First of all if we consider Google’s Quality Guidelines on link schemes it clearly states that any “behaviour that manipulates links to your site or outgoing links from your site” in order to “manipulate search results” could be penalised. This would clearly indicate that whether you link out to or are indeed linked to from a fake news site or fake news content you could indeed be penalised.

Secondly, if your website has have been found to contain fake news, either purposefully or by accident, clearly you face a greater chance of being penalised. However, Google has always been reluctant to remove content from its search results, which indicates that if, algorithmically, your site is providing relevant content – fake or otherwise – you may still rank in top positions of Google.

To ensure you don’t get stung by Google there are a few things you can do:

Despite the attempts being made by Google and others to curb the growing trend of fake news, it is clear that the problem is not an easily combatted one. Algorithms used to seek out and penalise fake news are only as good as the programmers who create them, meaning currently some sites will always slip through the net.

In short, individuals blame Google, Google condemns the sites creating fake news, and the rest of us become a little more sceptical about what we read online.

Ensure your SEO efforts don’t become a victim of fake news by continually monitoring your site and take proactive steps to disassociate yourself from the risk.