How Harambe’s Death Is Affecting Search

The world is up in arms over the death of gorilla Harambe, who was shot dead to save a toddler who had fallen into his enclosure at Cincinnati Zoo on Saturday 28th June. Is there such a thing as bad press? We investigate the search impact of the events following this event.

In the days that followed the tragic incident, social media has exploded with people ranting, paying respect to Harambe, showing support for Cincinnati Zoo, pointing the finger at Cincinnati zoo, pointing the finger at the family of the toddler and sharing petitions demanding #JusticeForHarambe – but what does this look like from a search perspective? We take a deeper look at the Harambe news story to see what the effect on search has been for Cincinnati Zoo.

The impact of this news story is clear to see on social – in fact, I’d put money on you having seen the video or shared content about it in your news feed on Facebook or Twitter Timeline.

Looking just at Twitter hashtags, we can monitor the three most popular newly created hashtags to have a look at some of the impact:

Even today, six days on from the incident, the number of people talking about it on Facebook is in the hundreds of thousands. Obviously this is just the tip of the iceberg in social, but we want to delve specifically into search.

A breaking news story like this one results in a traffic spike to the source site and also relevant sites offering further information for users. Of course the news sites reporting on the action get a surge of traffic and scoop the majority of social shares, but the source site itself also sees a spike and potentially even ranking position improvements.

In the case of Harambe, Cincinnati Zoo’s website has seen a number of changes from a search perspective. The Cincinnati Zoo website has gained more than 55 links in the past week, which includes links from influential publishers such as:

In the long-term, these additions to Cincinnati Zoo’s backlink portfolio will be hugely beneficial in boosting the domain authority (DA) or ‘trustworthiness’ of the site.

These ranking improvements highlight how Google understands how relevant a site is to a keyword based on social mentions, links and general digital buzz. By moving up the rankings, the site is allowed to gain greater exposure than before in the SERPs.

Cincinnati Zoo’s organic traffic reached an all-time high on the 1st of June of 140,144 visits, highly likely as a result of the incident and increased interest. The average organic traffic for the entire month of May is 117,244 visits, almost 20% less than the traffic on the 1st of June. The 2nd of June continued to show higher than average traffic with 134,365 visits.

What’s interesting is the dip in organic traffic seen on the 28th, 29th and 30th May – the day of and two days following the incident. The zoo was actively publishing content on the blog about the incident on the 28th, so the dip remains unexplained.

In the past week, the amount of indexed content on Google across search, news, images and videos for the exact match “Cincinnati Zoo” is enormous to say the least:

These numbers show just how much publishers, websites and your average Joe is adding to the digital conversation.

Google Reviews allows us to highlight one of the negative impacts in terms of search that the zoo will experience. The news of Harambe’s death has prompted people from all over the world to take action and make their feelings of the incident known. In the past week alone, over 200 people have left a one star review on Google Reviews about Cincinnati Zoo, despite likely having never visited. The number of one star reviews is now almost equal to the number of five star reviews in less than a week and more negative reviews are likely to be added in the near future as the story continues to run its course. 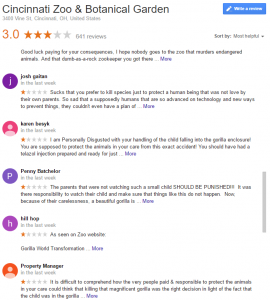 How the search landscape can change for a business following a breaking news story can be fairly positive, even if it’s a negative story about the business. The unseen inner workings of search following Harambe’s tragic death have been relatively positive – purely from a search perspective for Cincinnati Zoo’s website – however offline reputation and financial impact is yet to be seen.