Hashtag fails and how to plan for success

The history of the hashtag
Originating in the late 1990s on IRC (Internet Relay Chat), the hashtag was commonly referred to as the pound sign and was originally used to categorise items like images, video, messages and other content into groups. This helped users to search for related items with ease.

In August 2007, the hashtag was first used on social media by designer Chris Messina to categorise content into groups on Twitter.

Over the years, the popularity of the hashtag has spread across almost all social media networks and hashtags are used daily by millions of people to add their two cents to global conversations.

It goes without saying that with the growing popularity of hashtags, brands had to get in on the action to keep up with the ever changing, fast paced digital world. Hashtags give businesses increased exposure to new customers at no extra cost – a complete no brainer when planning marketing campaigns. When used correctly, a hashtag can boost a brand’s following, increase brand awareness and enhance their likeability endlessly.

However, when used incorrectly, brands can haemorrhage followers, annoy people they have never interacted with before and hit the headlines for all the wrong reasons. Let’s take a look at how brands have failed miserably in the past and what we can learn from their mistakes.

Brands often falsely think a fun hashtag campaign can help them recover from a tough time in the press or can turn their bad reputation around. This is likely to backfire and cause more damage to the brand. If you already have angry customers, giving them a public platform to share their experience at large is not a good idea.

The New York Police Department learned this the hard way when they launched their ‘reputation building’ #AskACop #MyNYPD campaign. They asked Twitter to share photos of themselves with NYPD officers in an attempt to show the great relationship the citizens of New York and the Police Department have. Unfortunately, they launched this during the Ferguson protests after the fatal shooting of Michael Brown by the police. Inevitably, the hashtag was spammed with images of police brutality – at the rate of 10,000 tweets per hour during the height of the hashtag – it is still used to this day to share police violence incidents.

User-generated content from a few loyal followers using a fun hashtag is not going to change the opinion of the public en masse.

Another key mistake brands have made in the past is jumping on any trending hashtag just to gain huge exposure for their commercial message. Before joining the conversation, ask yourself – is it relevant to my brand?

DIY shop & garden centre Homebase fell fowl of this earlier this year when they jumped on the #RIPPrince hashtag after his sudden death. Amidst emotional tributes from fans and famous people, Homebase shared a generic good morning message and added the Prince hashtag in at the end to boost exposure. 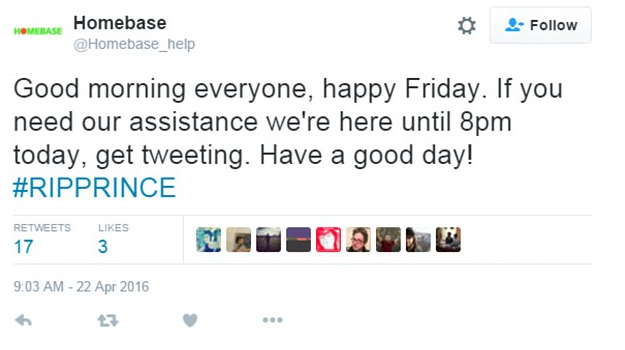 Of course, Homebase swiftly deleted the tweet but not before it had been screenshotted, shared by Twitter users and covered in national press.

US frozen pizza brand DiGiorno also used trending tweets to boost their reach when they tweeted about pizza using #WhyIStayed. Unfortunately for the brand, they didn’t bother to check what the hashtag meant and didn’t realise it was being used by thousands of women to share their stories of why they stayed in violent relationships following the suspension of NFL player Ray Rice for beating his wife and her decision to stand by him.

The lesson here? Make sure you understand the hashtag and that it’s relevant for your brand.

Another seemingly obvious element brands seem to regularly forget about is timing. If your brand has recently been receiving press attention for all the wrong reasons or had a bad customer service incident that went public, avoid hashtag campaigns until it all blows over.

Qantas Airlines decided to ask their fans to share stories of when they’ve been pampered on board using #QantasLuxury. But just a day earlier, the entire Qantas fleet was grounded for an entire day because of a labour dispute. Disgruntled customers still dealing with the fallout from the delays  jumped on the hashtag to rant and share sarcastic comments. Although trying to laugh it off and joke around with customers, I can’t imagine it was a fun shift for the Qantas social media team that day!

Don’t offend or alienate your fans

Again, something you may think any credible social media team would have thought carefully about is offending fans and potential customers. If you’re in any doubt you may offend with your post, don’t publish it.

There are exceptions and many brands like Paddy Power are famed for their hilarious social media accounts and use them as an extension of their brand. But it’s all or nothing – either sarcastic and bordering on offensive is your brand tone of voice or it’s not.  Don’t post something that could be offensive for a quick laugh from a few when it could alienate your loyal fans.

Popular beauty brand Benefit thought they’d get a few likes for joining in the fat-shaming thread #MakeAMovieAFatty. The hashtag asks people to change one word of movie titles to make them about weight. 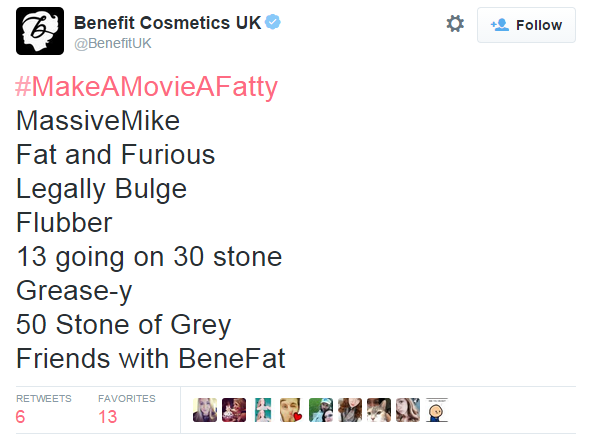 What they actually received was fat-shaming backlash from plus size bloggers, fans and also from the press who were quick to share the tweets and fan reactions.

Now we’ve learned from famous brand fails, it’s time to take a look at how to plan for success with your next hashtag campaign.

Coping with a hijacked hashtag

Sometimes, all the planning in the world can’t prevent a social media backlash and a hijacked hashtag. It doesn’t mean brands should never use a hashtag, it just means they should know how to cope when it happens.

If you find you’re attracting the wrong type of interaction on your hashtag, here’s how to handle it:

So, there you have it, the key learnings to take from brand fails in the past, how to plan a successful hashtag campaign and how to recover if your hashtag is hijacked.