A few hours ago, Tim Peake was launched into space, his planned journey taking him to the International Space Station. He is the first British astronaut for 24 years, and the first official UK astronaut. At around 11:15am, shortly after lift off, there were around 38,000 tweets about the space launch. Then, in the midst of this historic moment, Twitter introduced ‘Moments‘ into their main navigation. 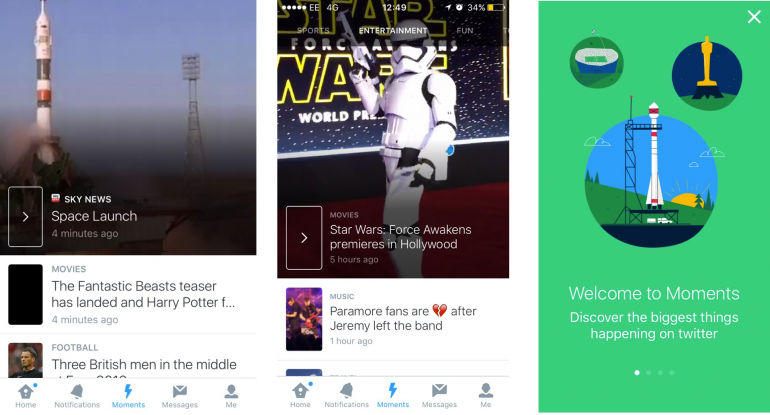 This may sound like a simple change, but what happened was that thousands of people could watch the space launch live, either on their mobiles or desktops, and tune into what was happening. Even David Cameron got in on the action.

It was great to watch Tim Peake blast off on his mission to join the International Space Station. pic.twitter.com/pqAw0ETuok

Whilst this is a good move, Twitter have been positioning themselves around ‘moments’ for the last few years.

I was at a conference in 2013 when UK Twitter MD Bruce Daisley gave a social media presentation about moments. Specifically, he said brands should ‘plan for everyday marketing moments’ (video link here).

At the time, this was a new concept. ‘Moments marketing’ seemed like a great idea. Tap into moments that matter. Tap into people’s lives. Bruce talked about everyday moments like hitting snooze on the alarm, connected moments such as chatting to another Twitter user or brand, and live moments, such as a space launch.

Two years on, and social media use on mobiles has skyrocketed. 80% of Twitter’s 320 million active users are mobile. As of September 2015, Facebook averages 894 million mobile daily active users.

Moments marketing was beginning to make sense. It is, in effect, real-time marketing across social media. Just with a different name.

But then something happened that really made people sit up and notice. Google joined in.

Not content with using moments marketing, Google put their own spin on things. Earlier this year, they made a big push for ‘micro-moments‘. Here’s what they had to say: “Mobile has forever changed what we expect of brands. It’s fractured the consumer journey into hundreds of real-time, intent-driven micro-moments….It is the new battleground for brands“.

What about Facebook I hear you cry? Yep, they are involved too. They launched a ‘Moments’ app a few months ago, and have focused their attention around photos. Ina slightly different slant, the app, which lets you get photos from friends and share photos in return, is trying to solve one of the long-standing challenges with photo sharing: getting copies of the photos you didn’t take.

It is still in the ‘moment’, but it hasn’t hit the ‘this is how brands should attack moment marketing’ angle just yet.

Whilst moments marketing is great in theory, brands need to be clever about pushing marketing messages out to them. Moments are social micro-events that happen every day, to every one around the world. It is a far more social, and a far more personal space than ever before.

As such, moments marketing needs to be crafted cleverly, and the consumer needs to be considered. Rather than being advertised to, consumers are looking for brand experiences, whether that is on social media, on the web in general, or in real (offline) life. This AdAge article sums up my point nicely: Consumers Want Experiences, Not Things.